Why I do what I do – Belfast Telegraph article March 2022

I’d the absolute pleasure of being interviewed recently by the fabulous Stephanie Bell for this incredible article which appeared in the Belfast Telegraph this week. I have to say I was so nervous about this being published, it’s definitely nerve-wracking being so open and honest – but I feel so strongly about it that I couldn’t let this opportunity go to waste! Have a wee read of the article below, and I’d truly love your feedback! 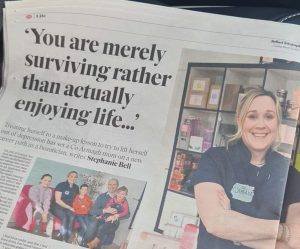 How treating herself to a make-up lesson to try and lift herself out of depression set a Co Armagh mum on a new path as a beautician.

Aisling O’Connor has built her Dream Beauty Studio on the belief that just taking time out for yourself can improve your mental health, in an approach she calls the ‘lipstick effect’. She says: “The main concept underpinning my business is that of the ‘lipstick effect’: the psychological phenomenon of putting your make-up on is proven to increase self-confidence and boost self-esteem. “But it’s not just about putting on a full face of make-up; it’s about taking time for yourself and not being afraid to put yourself first now and again. I know because I have been there.”

Aisling (38) is married to Sean, a city banker she met while she was studying for a business studies degree at Queen’s University. The couple have three children, Aoibhe (9), Joe (7) and Orlagh (5). A few months after their marriage 12 years ago, Aisling suffered a devastating miscarriage and it, together with other struggles at the time, left her in the depths of depression.

She recovered with the help of medication but four years ago realised that her illness had returned and so decided to take steps to change her life. She says: “My first pregnancy ended in miscarriage, and it was a very much wanted baby. It took me a long time to conceive again and the whole stress of it led me to a really low point. “I wasn’t happy in the job I was doing either and there was a lot of pressure.  “I think if you are not listening to what is going on in your head it will manifest physically in your body.  “One morning I took really bad pains in my stomach which had me doubled over and I went to see my GP. We chatted and he diagnosed depression. “I knew how much pressure I had been under and that I had been down, but I wasn’t listening to what was going on in my head.“I was treated with anti-depressants and went back a couple of times to get the dose increased. Then I stopped taking them when I became pregnant with Aoibhe.”

For the next few years, the busy demands of motherhood kept Aisling focused, although deep down she knew that life was not being lived on a level of joy that it should be. With hindsight, she feels she was always predisposed to depression. Second time round she had no hesitation seeking help and feels very strongly that there should be no stigma attached to taking anti-depressants. She says: “I think I was just coasting along as a busy mum. I knew I didn’t feel as bad as I felt before. The first time I felt really ill and struggled to get out of bed and was very stressed and down. “This time I didn’t feel great, but thought that I just had to get on with it. “I was functioning, but I knew it looked like I had depression again. It feels like you are living your life in a fog. You’re surviving rather than enjoying or getting anything out of life.

“I had three young kids and I felt I had no choice but to get well and try and sort myself out. “Some people who are struggling feel afraid of what others might think of them for taking anti-depressants, but there is no shame in it. It is no different to taking a tablet for blood pressure or diabetes. “It’s not right that people feel there is a stigma. If I have to take anti-depressants for the rest of my life, that’s no big deal, because I want the best out of life.” Aisling was again prescribed anti-depressants four years ago and she still takes the medication.

However, a huge turning point came when she decided to treat herself to something she would enjoy. Having always loved applying make-up and regularly doing it for friends and family, she booked herself an afternoon masterclass. This led her to take the leap to a full, 16-week course at the Oonagh Boman School Of Makeup and soon she was planning to set up her own business. She recalls: “Initially it was just to do something for myself, as I realised that I put everyone else first and rarely made any time for just me. “I had always had it in my mind that I wanted to run my own business. “I graduated from Oonagh’s course at the end of 2018 and had started to set up my own business. “I opened a studio at home and had just launched the website and developed branding when Covid hit and I wasn’t allowed to work. “Looking back, I was lucky I had the website, as I was able to sell beauty products and generate some income along the way.”

Undeterred, Aisling used lockdown to complete further training and add to the range of services she is able to offer. She also transformed the garage at her home into a modern, hi-tech beauty studio. Finally able to launch last November, she did it in style with an all-female event called ‘Look Good, Feel Fabulous’. The afternoon of fashion, make-up demos, cocktails and an empowering motivational talk was a huge success, with more than 100 women attending. “My main goal was to get a room full of women and have them leave that afternoon feeling uplifted, encouraged and, above all, realising that it’s OK, and, in fact, of extreme importance, to put themselves first every once in a while,” she says.

Now she hopes to use her own experience of depression to help make her clients feel good about themselves. She has already held a ‘Make-up and Mindset’ online tutorial, which was a great success, and plans to continue to build women up through her new company. “I just love what I do and love empowering women to feel better about themselves,” she admits. “I am feeling better than I have felt in years. As well as medication I go to the gym three or four times a week and have I found exercise a big game changer. “I feel that people need to realise that it is OK to put themselves first — and that’s the mindset I advocate for my clients. “You can’t pour from an empty cup, so it is OK to look after yourself as well as everyone else.”

Aisling has emerged from one of the bleakest periods in living history and a tough time in her own personal life with new skills, a new business and a new can-do attitude. In her new studio clients can have their make-up, brows and nails done, as well as spray tanning and a soothing beauty treatment. For Aisling, managing depression is something she believes she will always have to do. Finding the key in simple things such as treating yourself has pushed her to continue to create awareness of the illness as part of her business approach.

She adds: “I do believe that just putting your make-up on can make you feel better and more confident. “I can see it in my clients every day. They leave the salon with their heads held that wee bit higher. “I just want other women to feel better about themselves — I know how hard that can be, I’ve been there. And it was hard to pull myself out of that hole, but it can be done. “I’m not saying that everyone needs to wear make-up, but even to take 10 to 15 minutes every day to do something that will give them a lift, maybe even just wash and cleanse their skin properly. “It’s about finding 10 minutes in a busy day that is just for you. “As women and mothers we are guilty of doing everything for everyone else and I think people need to realise it is OK just to do things for ourselves. It’s not selfish, it’s about finding a little bit of feel-good. “And the better you feel about yourself the more you can give to others. “I’ve been there, and I still do everything for everybody else, but at the same time I do something for myself.

“That’s what I believe the ‘lipstick effect’ achieves.” 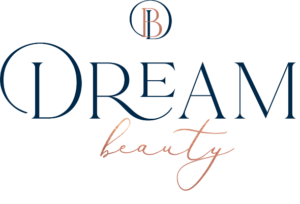